Read on to find a detailed review of DJI Osmo Pocket!

DJI Osmo Pocket is a very unique device. It’s a gimbal that comes with its own camera, and all of it in a package that isn’t much bigger than a snickers bar.

Why is this interesting or even a product? Well, it aims to provide a lot of things at a very reasonable price and size.

Firstly, it provides stabilized footage the likes of which you can only get by using a gimbal. And secondly, it packs in a great camera for its size, which might actually be better than your smartphone when it comes to video.

Even if the gimbal fits in your pocket, there is still the setup process of getting the gimbal out and then attaching the phone to it. If you have a really fast and easy to setup gimbal like the DJI OM 4; Check out OM4 full review here. You will still have to at least carry a separate hard to pocket gimbal around.

DJI Osmo Pocket comes in at a total of 350$ and it gives you the stabilization of a gimbal and most probably superior quality footage than your smartphone, in a package that is easily pocketable and super convenient to just pull at and start recording with.

Let’s dive a bit deeper into why this device is so game changing.

Check the latest deals on Osmo Pocket Review on Amazon

Slow motion video that is stabilized used to cost, over 1500$ easily, that is a camera, a lens, a gimbal that can support that. This has all of it and it fits in your pocket, the quality isn’t the same, but its not bad by any means it’s perfectly usable. Couple of filters and color correction and the footage the OSMO pocket brings is impeccably amazing.

Honestly, I have no doubt that in the second generation they will go for a camera sensor that is much larger in size, because I do believe that the camera is the only thing holding this back. Pretty much everything else is up to par with more expensive setups that cost over 1000$.

The reason the camera isn’t as good as the rest of the gimbal is because the size of the sensor is the same as a smartphone, and smartphones use advanced software processing to get really amazing video from those sensors.

The gimbal doesn’t have a super-fast processor to do all that, but if you take the footage out and edit it, it really becomes comparable to a smartphone.

Again, it cost 350$ and it can out do a smartphone and a gimbal setup, provided you just edit the footage and that’s not even mentioning the other camera features it brings to the table. This is seriously an amazing device for its size.

See also  How To Turn Off DJI Drone

The camera is mainly great for taking landscape shots and videos, it has time-lapse and motion lapse built in to accommodate that as well.

The 120-fps footage taken can be slowed down to 20% to get 24 fps 1080p video, or 60 fps 4k footage can be taken and slowed down to 40% to achieve slow motion video as well. It excels at landscape and wide shots which are stabilized.

How is it for vlogging? Well not the best unless you hook up a phone to it. The tiny screen on it doesn’t really make for a great recording experience, you can’t even see if you are in focus or not. Attaching a smartphone to the gimbal does alleviate that.  The built-in mics are good, not great but they will get the job done.

Is it worth using over a standard smartphone gimbal setup? Yeah! The footage is still far more stable with the OSMO pocket while walking and switching to taking cinematic shots is really easy too. This really brings vlogging and cinematography down to the average person’s realm of usability.

Check out the latest deals on DJI Osmo Pocket on Amazon

Ease of use is the name of the game with this device and that does go into the design as well, its tiny and fits in your pocket, it comes in a case that keeps it protected, it provides better footage than a smartphone.

There really isn’t much to say here, the design is actually quite perfect for what it aims to achieve, the only thing I wish they did was include a bigger and better sensor; as it does have the space for it, or have some way to attach wide angle or variable zoom lenses to this device.

It has a couple of buttons, a tiny screen, a SD card slot and two USB connectors, one for charging and one for connecting to a phone. It measures 121.9 x 36.9 x 28.6mm and weighs 116g, it does include an adapter to connect to a phone.

Other than that the design is really a win for this device, I like it and most people do as well, the main problem that arises is that, it’s not as durable as something like a GoPro camera, I understand why people make the comparison but the GoPro is an action camera, this isn’t and hence it isn’t as durable as that. It is however much more stable, as this is meant to be a stabilized camera not an action camera.

I really hope that in the 2nd generation of the product they include, the option to mount lenses and ND filter on to this device and include a higher much better-quality sensor in it. As those are the things that hold this device back. It’s overall very well designed.

Check it out here

Okay, so this device brings some interesting features to the table and most of them, similar to the nature of the device, aim to bring professional level shots into the average user’s hands. The first of which is face tracking.

This allows the OSMO Pocket to lock onto your face and follow it around as you move around, works well with faces, not so much with anything else. Again, software improvements can fix this.

Other than that, the two stand out features are time lapse, its super easy to do time lapses with this, but the more amazing feature and quite unique to this device, is called Motion Lapse, this basically records a time lapse video, while rotating the camera from point A to Point B, you can set up the points in the camera, and you can record for 1 hour to 3 hours. The results especially for landscape time lapses are stunning.

To do what this gimbal achieves would require, a camera, a gimbal and someone to rotate the camera around slowly and The Pocket just does it with a couple of taps, hats off to DJI for including this feature.

Works quite well especially with the stabilization can sometimes in the right lighting look like a professional cinema shot. The camera does hold back this feature but still what it does is pretty amazing.

But, most of us have a smartphone and last time I checked smartphones weren’t taking cinematic shots. The Pocket However, does.

Its footage quality is at 100-bit rate which is double what most smartphone cameras do, and attaching the phone does make it great. Even if your phone isn’t the best, it will still give you a much larger screen and make this device actually usable for vlogging.

The stabilization is good, its not great again being pocketable does come with some drawbacks, but the drawbacks aren’t as sever as they might seem, the footage between the DJI OSMO pocket and DJI OM4 or DJI OSMO 3 isn’t that different, all of them stabilize basically the same, the stand-alone gimbals do have a slight advantage but not by much.

Comparing it to professional DSLR gimbal stabilizers is sort of unfair, due to its size, camera quality and price. The stabilization how ever on this little guy is quite good and if you are used to using gimbals then the shots you can take with this will be quite stunning.

Here is some sample footage to give you and idea of what it looks like.

DJI Osmo Pocket – Who’s it for?

This is a very important question to ask, as this directly competes with a lot of things. Gimbals, smartphones, professional DSLR and Mirrorless camera setups which are stabilized. It doesn’t beat all of them or really any of them directly, but rather does everything they do almost as well.

Comparing that to its price and size, you can see why DJI put the time and money into developing the Pocket.

DJI isn’t some small start up company, they know what they are doing, they have the best drones on the market, the best stabilizer for smartphones and professional cameras.

They didn’t just make this product as a fluke, they really brought in all of their expertise into this one product and it shows.

For the average guy who just wants to take shots of his family and friends this isn’t the device for you, your smartphone is probably enough for that, but for the creative individual who is just starting out. This is a cinematic beast.

It covers almost everything a vlogger will want to do and is pockettable.

Creative individual or not, you have a smartphone by now, its 2020 and combined with this you can really get some amazing shots and cinematic videos, its no brainer for a vlogger starting out to get this. This will get you most of what you need. Until you have the budget to get the higher end stuff.

The battery life might be a bit disappointing though, at just 1 hour 40 minutes, but having a charging bank isn’t that inconvenient to bring around, if you are planning on shooting for over 2 hours.

The DJI OSMO Pocket is a great overall device, its price is remarkable for what it offers on its own, the camera quality isn’t the best but its great compared to a smartphone. The added stabilization is huge win for anyone using it.

The compact size and the host of features it brings, like time lapse, motion lapse, slow motion video and face tracking is remarkable for the price.

It beats a smartphone and gimbal setup, which might cost around 1000$ plus by its 350$ price and it provides more cinematic features than any smartphone out there right now.

Lastly, it does all this in a pocketable for factor, this is an amazing tool for creative people and I love what DJI has done with this device, I can’t wait for the 2nd edition of this device.

Is DJI Osmo Pocket worth it?

DJI Osmo pocket is lightweight and compact making it very portable. It takes pretty decent images in low light too as it can shoot at high ISO levels.

Is DJI Osmo a good camera?

DJI osmo pocket has a pretty good camera and you will be able to take pictures in low light settings too as it allows for high ISO levels. 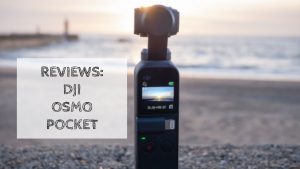 Here's my detailed DJI Osmo pocket review. Check it out!