BREAKING: Drone Video Footage of Notre Dame Cathedral [Before and After Fire]

The horrific fire disaster in Notre Dame Cathedral happened on 14 April 2019. The 850-year old cathedral was almost destroyed. The gothic little tower collapsed in front of the spectators. Fortunately, the main structure and two large towers have been rescued. Here you can see drone video footage of the historic building, Notre Dame.

Why firefighters didn’t use planes in Paris

While the flames blazed from Notre-Dame Cathedral in Paris, US President Donald Trump advised the fire brigade to extinguish the catastrophic fire from the air with a seaplane. Trump’s advice on Twitter resulted not least from the video images he saw on CNN. For a long time, no extinguishing work was visible from the outside, online viewers asked: Why is the fire brigade no longer working to save the church? Trump’s advice, however, was not very helpful.

Because experts agree on one point: If tons of water rattle down from the air, it can cause considerable damage. Sven Lindenfelser, Product Manager at the fire engine manufacturer Rosenbauer, also thinks it makes more sense to fight a fire from the ground in the event of a building fire. “Water cannons on aerial rescue vehicles, such as those used, can be used to fight fires much more effectively than fire-fighting aircraft,” he explains.

The German subsidiary of the Austrian group in Karlsruhe also supplied the Paris fire brigade with B32 aerial rescue vehicles. Most fire brigades use these vehicles with a telescopic arm whose platform with water cannons reaches up to a height of 32 meters. The type B32 was also used in Paris. Up to 3000 liters of water can be sprayed per minute. The range is up to 70 meters. “This is a considerable extinguishing effect,” says Lindenfelser.

The range of turntable ladders and aerial rescue platforms with water cannons extends from 20 to 64 meters in height. This corresponds to a 20-story building. Although no municipal fire brigade in Germany has recourse to the maximum height, some emergency services in large cities have platforms that reach up to 53 meters. In addition, industrial fire brigades, for example in refineries, have water cannons that can even spray 6,000 to 7,000 liters of water per minute onto a source of the fire.

According to Lindenfelser, there is room for up to five firefighters on a lifting platform at dizzying heights such as the one used in Paris. Total weight of 500 kilos is assumed. Although the water cannons can also be remote-controlled from the ground, “a firefighter at height can put out the fire himself,” says the Rosenbauer manager.

At the same time, the Parisian firefighters, at the risk of their lives – but outside the range of vision of the cameras – proceeded inside the cathedral to extinguish the burning wooden interior furnishings in the cloister and to save art treasures such as the crown of thorns of Christ or coronation robes of the French kings. But when the wooden ridge turret collapsed over the cloister of the church, its ruins broke through the roof.

Afterward, the situation in the interior was too dangerous for emergency forces. For this reason, the Paris fire brigade subsequently used an extinguishing robot on chains. The Colossus vehicle from the French manufacturer Shark Robotics not only supplied light and video images from the interior but also pulled a hose into the cathedral and extinguished with a remote-controlled water cannon.

How did firetrucks manage to get to Notre Dame

The parking spaces for fire trucks and turntable ladders are always kept free. Also with large events like the Christmas market on the cathedral plate or concerts, the fire-brigade pays attention to the fact that the places and journey ways can be used in the emergency case immediately.

If, however, an emergency should be so serious that it is no longer possible to deploy people on the roof itself – for example, because of the danger of collapse or heat – the Cologne fire brigade would have to borrow an aerial rescue platform that reaches a roof height of over 60 meters. Such a vehicle is available in the vicinity of the cathedral city. With the TM90, the plant fire brigade of the energy supplier RWE at the Neurath power plant site owns the aerial rescue platform with the highest working height in Europe.

The telescopic arm of the Bronto Skylift extends to a working height of 90 meters and, with its lateral boom, which has a reach of 32 meters, could even place firefighters on the ridge of the façades or on the towers. It was last used in Cologne during the accident of the Cologne Rhine cable car in 2017. 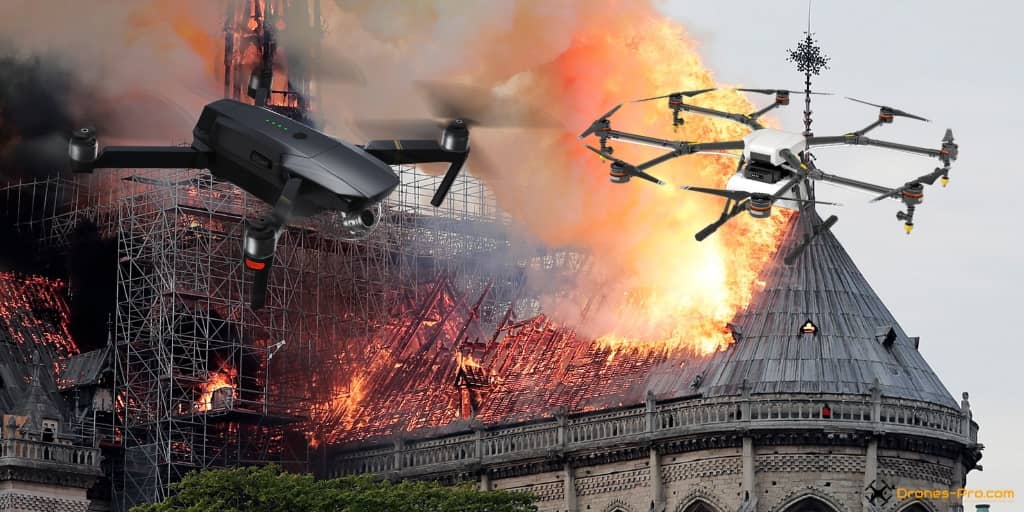