Why would you need a landing pad? If you are a proud owner of a drone, you probably want it to live as long as possible since they are quite expensive. If you want to avoid debris, dust, or water flying into the drone’s propellers or camera lens, you should consider getting a landing pad. 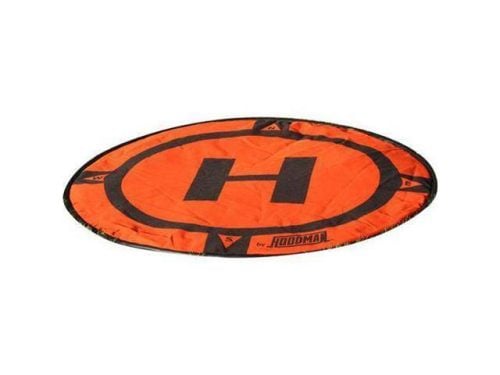 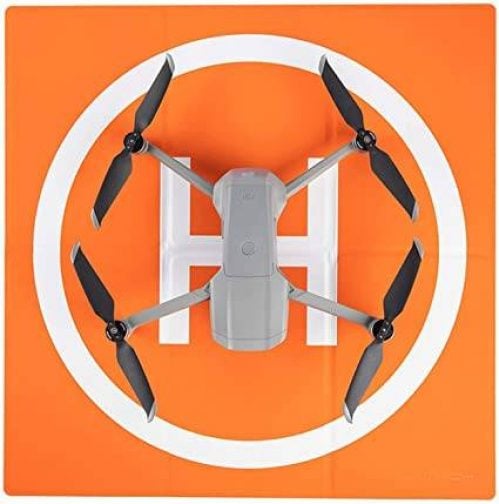 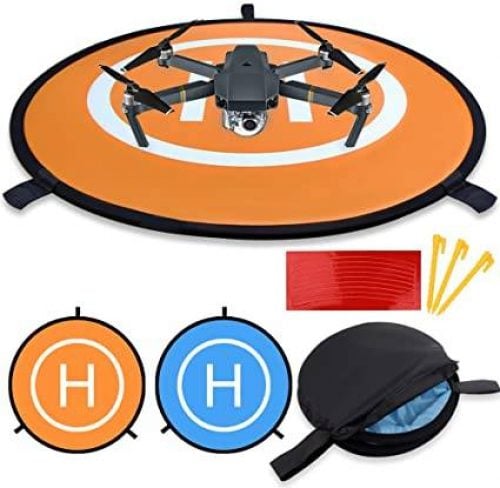 There are a couple of factors that need to be considered when buying a drone land pad.

How heavy should your quadcopter landing pad be?

The weight of landing pads is an important issue because drones generate a lot of wind. After all, they need to be able to take off and fly. The wind from the quadcopter can easily blow away the landing pad if it’s too lightweight. A landing pad looks like a big circle, so if you blow wind towards it at an angle, it will flip over or ride the wind like a Frisbee, unless it is heavy enough.

So, having a solid, durable, and the heavy metal frame is necessary to keep the pad locked into place when you approach it for the landing. Alternatively, you can peg a landing pad down to the ground. Even if you do manage to do it, it will take time and effort. But in this case, you can get away with a lighter landing pad with the additional weight of pegs and a hammer.

Most people just want to through down a landing and be able to pick it up. So, it is recommended to get a heavy landing pad instead of carrying around a hammer and pegs.

The Ease of Use

Does it spring open and unfold easily?

Surely, when you have a drone, you want to focus on actual flying instead of wasting time on setting up the landing equipment. So, having a landing pad that opens easily, spring locks into full size (like an umbrella), and folds into a tiny little package is a huge timesaver.

These are the main things you need to worry about when buying a landing pad:

The visibility of the landing pad meaning it needs to be bright and vivid, so you can see it even through your drone’s FPV mode. Basically, it has to have visibility strips, same as on emergency worker jackets, to be recognizable in the dark. This way, even at night time you will safely identify the landing pad and land on it.

The resistance to sand, dust, water, and snow. You aren’t buying a landing pad to sit at home on a comfortable and safe couch, right? You are considering getting one because you are will go places where these elements can harm the drone.

How to Land Your Drone on a Helipad?

If you ask most pilots, all of them will tell you that most of the crashes happen while taking off and landing the plane. Taking off is easier with a drone than landing it – we will discuss landing in detail a bit later. A good general rule of thumb is to be patient and calm when taking off and especially while landing.

When taking off be patient and calm, focus, and don’t do anything irrational. A landing pad will greatly reduce the amount of dust being kicked up. However, at first, you should get a feel of how much dust is actually getting blown away when taking off and then safely ascend up.

The reason for paying attention to the dust amounts lies in the effect called the Vortex Ring state. If you don’t take your time while descending, you get hit by your own downwash and very rapidly descend. Don’t descend faster than your drone user manual suggests.

The other thing pilots face while landing is the dreaded ground effect. This is due to the fact that there is too much air between the drone and the surface it is trying to land on and it happens when you instantly start to descend.

So, make sure to descend slow and steady and let the rotors wind down and push less air downward. Helicopter landings take a lot of time and since your drone is literally a miniature helicopter, the same rules apply.

Our Picks On The Best Drone Landing Pads

This landing pad is great for landing your drone as it completely fulfills all the requirements:

Honestly, it’s a great overall landing pad for your drone.

If your drone is a little smaller then, try out the next landing pad.

It is designed for small drones in particular since no larger version is yet available. But it does check off all the boxes on our list.

Unfortunately, this great product is not available in larger sizes. The folding mechanism by Pgytech is more durable than the spring mechanism on the Hoodman, however, its smaller size makes it not applicable for larger drones.

This landing pad by Kinbon gets the job done at a much lower cost. Key features include

On the other hand, if you practice and learn to secure it properly into place before you launch the drone of the helipad, this option will suffice. The price alone is a great persuader.

FAQs about Landing Pads for Drones

owing reasons:
Most crashes and problems happen to helicopters during the takeoff and landing. Since your quadcopter is literally a miniature helicopter, getting a landing pad will make the entire landing part much easier and safer.
The takeoff usually kicks up dust, sand, and debris from all over the place and all that dust can damage the lenses and propellers. A landing pad will minimize how much sand gets around your drone and reduce the harm.
Lastly, landing pads keep your drone safe and stop them from landing into an unfortunate place and damaging your expensive gadget. All in all, they ensure that the drone stays safe and has a longer lifespan.
If you are someone who is really invested in using your drones, getting a landing pad can help you out a lot.

Does the material of the landing pad matter?

Although even a cloth with a metal ring around it beats nothing, a good landing pad will be made out of materials that are durable, and it will make the difference. It is important for the pad to be able to absorb the force of the landing and be wind-resistant. It also needs to be able to fold and unfold without getting damaged or worn out too soon.
Lastly, a good landing pad will be made up of waterproof material which enables you to land your drone on wet grass or road. Wherever you have set the landing pad, you don’t have to worry about the water underneath the pad getting blown around into the drone.

Does the color of the landing pad matter?

Yes, it does, but not the color in particular but the visibility. If you are in the woods and flying the drone through FPV mode and you happen to lose sight of it, it is essential to be able to recognize the landing pad from a distance to safely return to it.
There is a huge variety of colors that will look vibrant and visible from a far distance. However, don’t buy a drone pad that matches the color of the terrain where you intend to fly your drone. Generally, orange is the most visible and striking color for quadcopter landing pads.

Is the round landing pad better than the square one?

Not necessarily, it’s more of an aesthetic difference than anything else. However, a few advantages can be given to the square landing pad:
First, it is much easier to fold into a square or a rectangle than a circle. Second, it will have extra space at the edges and this type of shape will pierce the wind coming at it from the sides.
On the other hand, round landing pads also present a list of advantages:
First, it is easier to have a round landing pad with a spring opening than a square one, because of the ease of setup. Secondly, a round landing pad is much less likely to get blown away, as the cornerless sides are made to slide the wind around it. Finally, as already mentioned, it is more of an aesthetic difference than anything practical.

Where to apply orange reflective stickers to the landing pad for my drone?

First of all, have the appropriate amount and size of stickers. Most drone landing pads come with pre-installed ones but in case you didn’t check the package for some stickers inside.
In case you didn’t find any, here is a link to reflective strips.
Now, that you have the strips, it’s important to try to make a circle or a zone which clearly indicates your drone. Just use the tape to make a dot or a random line. You can also draw a cross, a circle, or a square which clearly indicates that it is safe to land within this area.
Whichever drone you choose, make sure to utilize the full space of your landing pad. Then, you will clearly see it from a far and have a bigger room to work with when landing the drone.