The drone community has been raving about the Yuneec Typhoon H since its launch last 2016. It has been on countless lists of recommended drones to purchase, especially for serious drone hobbyists and professional photographers and videographers. The main reason for generally positive feedback for the Typhoon H is its high-end drone features at reasonably consumer-friendly prices.

This article will look at this impressive piece of technology and help you decide if the Yuneec Typhoon H is also for you. 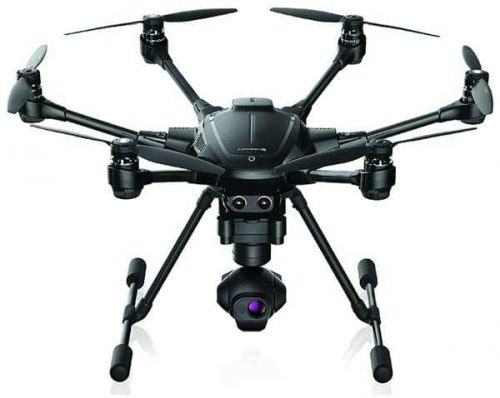 Upon its introduction to the market during the Consumer Electronics Show (CES) 2016 in Las Vegas, both casual and professional drone pilots have been captivated by the design and capabilities of the Yuneec Typhoon H.

The drone’s six rotors immediately caught consumers’ eye, as this was an apparent deviation from the four-rotor norm of its contemporaries. The Typhoon H’s retractable landing gears and arms were also clearly designed for the people who need to bring their drones to multiple locations in the most convenient way possible. It also has an Android-powered ST16 Ground Station – the Typhoon H’s remote control – with a 7-inch 720p HD screen display. Here you can set an automatic flight mode or manually control the aircraft to help capture the best images and videos. The aircraft is also equipped with a basic sonar-based object avoidance system, with Intel RealSense avoidance technology available for newer models.

Finally, its 25-minute flight time promises users maximum use of the most outstanding feature of the Typhoon H: the 3-axis anti-vibration CGO3+ gimbal camera the can rotate 360°, has a 94° field of view, and shoots 4K ultra HD videos and 12-megapixel stills.

Below are the other technical specifications of the Yuneec Typhoon H:

Still, the other main point of attraction of the Yuneec Typhoon H is its price. The widely-regarded DJI Inspire 1 offers the same features at almost double the price, while the very popular DJI Phantom 4 is in the same price range but offers less on the specs side.

Yuneec is one of the top manufacturers of drones globally, and their Typhoon H drone series is their centerpiece product for the more budget-conscious crowd. Nevertheless, they never skimp on innovative designs that would benefit the users.

First, their unique six-rotor technology is designed to ensure a more stable flight and more quality videos and pictures. This feature also provides a safer flying experience as the rotors are designed to function and allow the aircraft to land safely even when rotor malfunctions. Also, knowing that you can be assured of a stable flight comes in handy in those windy shoots. Lastly, the Typhoon H interior is devised to allow maximum air circulation to allow faster cooling of the whole system, especially during flight.

With all the significant technical aspects of the Yuneec Typhoon H’s physical design, I was quite concerned with the frail-looking parts of the drone. For one, the rotor arms and landing legs are supposed to bend and retract to facilitate a quick pack-up. However, they look more fragile, especially the rotors, compared to those conventional quadcopters. Moreover, the camera mount seems to hang on loosely from the drone’s body, which gives off the feeling that it may come off if a freak accident happens. I may seem nitpicky with these items, but drones are prone to wayward mishaps, and these parts are often the casualties. The good thing is that the Typhoon H replacement parts are easy to access – from online stores or directly from the Yuneec website.

What is inside the box?

The Typhoon H package comes with the fully-assembled hexacopter, the ST16 remote control, Battery, Charger, Sun Shade, User manual, and some small parts. You may say that with some set-up, the drone is ready to fly out of the box!

Kidding aside, preparation for the flight was easy as you have to plug-in the battery and turn on the ST16 Ground Control. The latter may take some time to get familiar with, but the great thing is that a large 7” integrated screen display is already part of the remote control system (and you need not use your tablet or phone). A 5400 mAh battery ensures an estimated 25-minute flight time on a good day.

One of the defining qualities of Typhoon H is its state-of-the-art image and video capture system. It is a 3-axis anti-vibration CGO3+ gimbal camera with a high-quality glass wide-angle lens that ensures up to a 94° field of view. It can be rotated 360° and captures 4k ultra HD videos at 30 fps and 12 megapixels of still images. Combined with the multiple autonomous flight modes of the Typhoon H, it is no surprise the continued appeal of the drone, especially to creative professionals.

These excellent camera specs are usually found on higher-end professional drones at staggering prices. However, with the Typhoon H, you get this camera on a drone at half the price. Value for money here!

The Yuneec Typhoon H prides itself in its different autonomous flight modes that could cater to the users’ various needs while shooting. The Orbit Me mode instructs the drone to fly in a circular path around you while maintaining your desired height and distance. Point-Of-Interest (POI) mode is similar to Orbit Me, but this time, it circles an identified object other than the user. The drone will fly upwards on a desired linear path and return to the user if Journey mode is chosen. Follow Me mode moves the Typhoon H with you while Watch Me mode has the drone remain focused on you. Using Curve Cable Cam mode, Typhoon H will fly a particular path while the user focuses on shooting the camera. Finally, Return Home mode turns around the drone to land beside the user. These functions are easily set-up and switched to the preference of the pilot.

The ST16 Ground Control system allows the pilot to control the flight, the camera, and other functionalities of the Typhoon H to facilitate these flights. It is an integrated transmitter, receiver, and Android platform with a 720p HD live footage display screen. The transmission range is rated up to 1.6 KM. It could be a challenge at first to be familiar with the functionalities of this system, but users should take time to familiarize themselves with the ST16 to maximize Typhoon H.

An FAA-compliant No-Fly Zone feature is installed in the system of the Typhoon H. This feature prevents the drone from flying near commercial airports. It also contains flights above 122m. The GPS creates an 8m diameter circle from the pilot during take-off and landing and builds a Geo Fence that prevents the hexacopter from flying 91m away from the pilot.

As said, serious drone hobbyists and professionals should take a serious look at the Yuneec Typhoon H if they consider adding or upgrading their drone collection. Not only are you getting a fantastic camera, but the various autonomous flight mode will significantly aid your image and video portfolio quality—the ST16 Ground Control remote system and flight stability provided by the six-rotor design of the Typhoon H.

As much as I recommend and rave about its features, the Typhoon H could be a challenge to set up and operate for beginner drone pilots. The modes are easy to understand but not easily mastered, and with the price tag of this drone, a mistake in-flight could be costly (literally!). There are far-cheaper and more newbie-friendly drones that would fit the learning curve, but it is not this drone.

Nevertheless, the positives I mentioned above will justify the investment you will make to buy the Typhoon H. Of course, if you want more, upgrade further at a slightly higher price. The Yuneec Typhoon Pro with Intel RealSense Technology adds one of the most advanced anti-collision innovations globally to the hexacopter. It can detect obstacles by building a 3D model of the world as picked up by the camera and smartly navigates around them. This model also has Team Mode – adds Typhoon Wizard, which lets you independently control the camera in-flight. You may also consider the Yuneec Typhoon H Plus, which incorporates an enhanced camera system – 4K UHD at 60fps for video and 20 megapixels for stills – and a better battery that can power the drone for 28 minutes. Whatever you choose, I assure you value for money!

DJI Goggles Review (2022 updated): Is It The Right Choice For You?

How To Connect Holy Stone Drone To Phone?

How Far Can I Fly My Drone From Remote Controller?