We curated a list of the best heavy Lift drones. Check it out!

A common misconception runs in the general audience that drones cannot withstand heavy pressure to lift objects. It’s a wrong notion. With the help of modern technology, drones are devised to have a superior payload capacity to lift even as heavy as 100 kgs conveniently.

This article will explicitly cover the salient features and top models of heavy-lift drones that you can check off your bucket list. So, let’s begin.

What are heavy-lift drones?

Heavy-lift drones, also called delivery drones, are unmanned aerial vehicles for the transportation and delivery of cargo, packages, food items, high-end cameras for military, commercial, and agricultural purposes. They can carry air cargo in all climatic conditions and remote locations.

These multirotor heavy-lift drones have simple assembly and deployment technology with exceptional features like VTOL (Vertical takeoff and landing).

Heavy-lift drones are the future of delivery services across the globe, and the coronavirus pandemic resulted in the aggressive use of drones for lifting medical supplies to the people.

DJI never fails to impress drone enthusiasts with A-grade drones. A valuable addition to the DJI family is the DJI Matrice 600 Pro, known to have extreme reliability and maneuvers. Hence, it is a perfect choice for both indoor & outdoor shooting and industrial research.

Italian-made octocopter, Tarot T-18 is your best bet for aerial photography. With the ability to fit DSLR and other high-end cameras, it has smooth flight features, apt for carrying fragile objects.

A more cost-effective quadcopter for photography is DJI Inspire 2. It has a balance between size, range, and speed. Even though it has less payload capacity, it can easily accommodate Zenmuse X4S and X5S cameras.

The average drone you see can only lift to a kilogram of payload. To have a drone lift more than a kilogram of cargo, you require heavy-lift drones. These drones are over-engineered to carry heavy objects and still fly smoothly.

Generally, heavy-lift drones are made of carbon fiber and aluminum to make them lighter and more durable. Hence, these drones are designed to balance out both weight of the objects and the battery to achieve maximum takeoff weight.

The primary components of heavy-lift drones are-

To have upward propulsion, the most significant component is the motor. It is not an easy task to take off with a heavyweight. Hence, they have brushless motors. In addition to that, counter-rotating drone motors are becoming popular since they provide more thrust for the flight.

If the motor is the left eye of the drone, then the propellers are the right. From the above section, you might have concluded that heavy-lift drones have greater than or equal to four propellers. It is because they balance the length and pitch. They are made of lightweight carbon fibers, and the long blades give the required stability and balance.

A preening moment is when the drone records a high-quality video with less interruption and durable support. Heavy-lift drones have that. They have stable gimbals to accommodate cameras, sensors, and payloads for creative videography.

The Working Of Heavy-lift Drones

Heavy-lifting drones have the same working principle as regular drones. The controllers give specific instructions to all components such as sensors, motors, electronic speed controllers during the flight.

Propellers and motors are the strength of the drone that strive for maximum payload capacity and good speed. The more the motors and propellers, the greater is the payload capacity.

Weight is everything! The lesser the weight of the drone, the smoother the flight. However, heavy-lift drones are designed to lift heavy objects, so the weight of the payload plays a vital role in drone stability.

It might come as a surprise to know that a typical heavy-lift drone must be capable of carrying twice the weight it is known to carry along with it. It is to ensure the safe transfer of the payload and stability.

Heavy-lift drones are anticipated to function in the Urban Air Mobility(UAM) ecosystems enabling ease of transportation. One day they could rule the air-cargo industry catering to the needs of several industries.

Let’s see some of the applications of heavy-lift drones-

It needs no introduction to the dire need for contact-less medical support owing to the contagious viruses emerging worldwide. One can carry an entire medical suite using heavy-lift drones to rescue emergency patients.

The need of the hour is food production as the world population is rising rapidly. The heavy-lift drones make a remarkable impact in the field of agriculture. Many heavy-lift drones are designed to aid the agro sector in spraying pesticides with strong penetration power to reach thick canopies. Soon enough, they will be an alternative to helicopters.

Heavy-lift drones can provide seamless frozen food transportation since they have a stable flight.

The Average Cost Of Heavy-lift Drones

Many factors affect the efficiency of heavy-lift drones, such as payload capacity, number of rotors, and propellers. They are powered with multiple batteries to achieve standard flight time. Hence all of these come at a price.

The cost increases with the increase in the number of rotors and propellers. The average price of quadcopters ranges from USD 500.

Hexacopters and octocopters are expensive, and their average price ranges between USD 1500 to USD 20,000.

Drone technology is an alluring sector with an ocean of expansion opportunities. Be it military, agriculture, or delivery services: drones have made an appreciatory mark.

However, the price of these drones is higher, and hence, do sufficient research before locking in on the product.

The day is near when you wake up to the drone taxis flying amidst the skyscrapers. Time only can tell what this fascinating industry holds in store in the future.

Yes, some high-end heavy-lift drones can lift people and hence can be of great use in rescue missions.

Which is the world’s most powerful heavy-lift drone?

A Russian make, Skyf drone is the world’s most powerful heavy-lift drone, having a payload capacity of 400 kgs.

What is the double redundancy system in heavy-lift drones?

In emergencies, heavy-lift drones can encounter system failure and lead to disaster. There is an arrangement of duplication of software and critical components so that if one fails, the other can take over. If it has two similar software, it is called double redundancy. 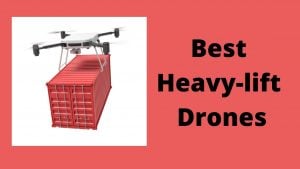 We curated a list of the best drones for heavy-lift. Check it out!