Trashcan? The choice of this name remains a mystery. Why not, after all. The Trashcan is a tiny whoop type device, with brushless motors, and designed for 2S batteries. It is therefore intended to compete with Beta75X from and Beta75 Pro 2. Who comes out as a winner in this fight? What is it really worth? Let’s find out from my Eachine Trashcan Review! 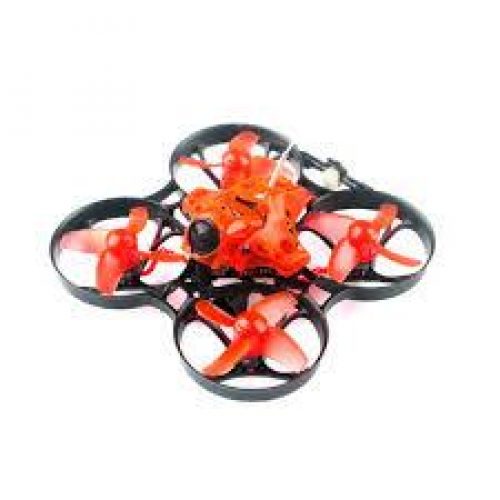 The Trashcan measures 3.8 in x 3.8 in x 1.8 in (9.7 x 9.7 x 4.5 cm), with a diagonal measurement of 3 in (7.5 cm) of motorized engines. It is therefore slightly smaller than the Beta75X, but a little larger than the Beta65X. How much does it weigh? The weight is 1.16 oz, without the batteries. The structure of the Trashcan is made of fairly soft plastic but stiffened with many reinforcements. It includes the propeller fairings. These are 1.6 in diameter guards mounted on brushless motors 0803 to 15000KV. The motor power wires are twisted and lead to connectors plugged into the flight controller. They will be easy to change.

The flight controller is a Crazybee F4 Pro, based as its name suggests on an F4 processor. It houses a 4-in-1 6A ESC and a connector. It is flashed with Betaflight 4.0.0. firmware, with an active OSD. The camera is an EOS 2 from Caddx, a 1200TVL NTSC model with a 2.1 mm lens. Good point: it is mounted on a hinge that allows its inclination. It is associated with a 5.8 GHz video transmitter on the flight controller. It transmits in 25, 100 or 200 mW, on 40 channels, with a dipole antenna in u.FL format. To adjust it, there is the SmartAudio function for use from the remote control, a physical button accessible from the back right of the Trashcan, or functions accessible from Betaflight Configurator.

To pair the Trashcan, simply turn it on and press the Bind button for a few seconds. It is very small, but easily accessible underneath the device, to the right of the connector. On the radio control side, it is simply necessary to launch the Bind procedure. It is still necessary to check that the protocols are compatible. The Trashcan operates in D8 mode with EU or Non-EU radio controls, or in D16 mode with Non-EU radio controls. How to choose? It happens in Betaflight Configurator, FrSky_X is the D16 mode, FrSky_D is the D8 mode.

To connect the Trashcan to Betaflight Configurator, simply connect a USB-MicroUSB cable, the connector is easily accessible. Betaflight’s settings are very classic, without any particular difficulty. The direction of rotation of the propellers, it should be noted, is of the “props out” type, inverse to that of Betaflight by default. It, therefore, takes up the choice made by BetaFPV. The “Flip Over After Crash” function is available, it is the Turtle Mode that allows you to turn the device over if it is on its back.

The Crazybee F4 Pro flight controller is designed to be powered by 2S batteries. By default, it expects 2 1S batteries since it is equipped with two PST PH2.0 connectors. Eachine also supplies 4 copies of LiHV 1S 3.8V batteries of 300 mAh 80C (7.9 grams per unit). In this configuration, the Trashcan weighs, in-flight order, 49.9 grams… But there are other variants. In the pocket, Eachine provides an XT30 connector. It allows you to connect a 2S XT30 battery for better performance – but this connector must be soldered instead of the double PST PH2.0. The other alternative is to use a single 1S battery. For this purpose, Eachine supplies a connector to be connected instead of one of the 2 PST PH2.0 batteries. There, no need for welding, it’s much easier.

I have flown almost all my flights in a 2 batteries 1S configuration, with the Jumper T12 remote control. First of all in D16 mode, but I’ve experienced too many . I switched to D8 mode, which corrected the problem, completely removing the . By pushing the throttle, the Trashcan takes off hard! You have to be gentle on the throttle to avoid sticking it to the ceiling, which is great news. The rest of the controls react well, nervously, in both stabilized and Acro modes. The OSD displays a lot of information, which is best purified to avoid polluting the video return. What is important? The RSSI radio, important if you move a little further outdoors or if you pass several walls indoors, flight time, battery voltage….

The Sensations In Flight

In immersion, the Trashcan confirms the impression of nervousness and quick reactions to the controls. No problem in tight corners, it holds well, suffers neither from inertia nor prop shake. The image is rather nice – all things considered, since it is an analog video, with pleasant, rather bright colors. The camera switches (a little too much) quickly to black and white in low light conditions. Several reviewers warned me that their Trashcan was vibrating a lot. But I didn’t notice this defect on the copy I bought! The image only vibrated in the presence of wind – which does not seem unusual given the size and weight of the device.

It is possible to change the inclination of the camera by partially unscrewing and then screwing the two screws back in. With the camera raised to the maximum, you can force the accelerations to obtain very nice speed effects. The Trashcan is a small car – but the battery does not come out of it unscathed. The good point is that the aircraft is capable of very smooth flights, almost in a hover, which allows it to operate in a dense environment of obstacles.

The recovery after a dive (diving, low rpm engines) is a little dangerous: without precautions, the Trashcan does not escape the now classic yaw washout. Translation: After the dive, the sudden go-around results in a strong yaw that can lead to loss of control or a crash. The effect can be reduced with a more gradual go-around. Maybe this concern is very mitigated by using a 2S battery in XT30 – but I didn’t try. Maybe switching to “props in” (the default propeller rotation direction in Betaflight) also makes things better – I haven’t tried either.

In some countries, the maximum authorized power is 25 mW. You risk a heavy fine if you exceed this power. But in countries where it is allowed, the Trashcan can also transmit at 100 mW and 200 mW. This gives you a greater range to go further, to stay at the same distance but with an image without parasites, or to pass more walls indoors. To change power, use the SmartAudio function via the OSD and your remote control.

What Do You Need to Know?

Betaflight’s 25 mW setting corresponds to 25 mW, but the 200 mW setting corresponds to 100 mW in reality, and 500 mW to 200 mW in reality. You can control the power with the 3 LEDs that you can see through the central pod. Note that adjusting the frequency range and frequency via the physical button is only effective for the duration of the battery. By the time the device is switched off and on again, it will have disappeared. To keep the settings, you must go through the OSD or CLI. Do we really go further with 200 mW? Yes, but the improvement of the range depends too much on the environment to effectively quantify the gain!

With 2 1S batteries, the flight time is about 3 minutes, a little less if you push hard on the gases. This is not much, but in the average of the devices in this range. With a 450 mAh 1S battery, the flight is less engaged, but the autonomy gains a lot: it reaches 4 minutes 30, sometimes a little more when the flight is soft. It should be noted that the “Flip Over After Crash” mode works perfectly with 2 1S batteries, but it fails with only one 1S: the device slips but does not turn around, due to lack of power.

The Trashcan seems to be handling the crashes well. The fairings sink slightly, which preserves the propellers. The rest of the device also holds well, including the camera’s tilting bracket. The 5 LEDs on the back display a “feedback effect”, i. e. a “K2000” back and forth. With a 1S battery, the Trashcan retains its in-flight characteristics, but gas management requires more support, and offers less power. This makes the aircraft a little more comfortable and allows beginner pilots to fly indoors without having to redesign the interior. No need to touch the PIDs, in 1S or 2S, unless you want to optimize the handling of the device. Mention of the presence of the CISSO radio on the OSD screen.

As we have seen, the D16 mode suffers from micro cuts. Go-arounds after diving usually end with a yaw washout. It should also be noted that the 5 LED bar at the back does not hold well in place, it jumps in case of a big crash and goes as far as disconnecting. The good point is that a connector acts as a fuse. The bad news is that you have to look for the bar, which measures only 2.7 x 0.5 cm – in the grass, it’s mission impossible. The u.FL plug of the antenna also comes off in case of a strong impact. A few drops of hot glue can reduce the risk of losing this antenna.

Should You Buy Eachine Trashcan?

The short answer is Yes, the Trashcan is a serious competitor of the Beta75X. It is not without defects, but its behavior is pleasant, overpowering in 2S but with reduced flight time, soft in 1S with excellent battery life. Just being able to use either 1S or 2S batteries is a significant advantage. It seems sturdy enough to hold races with friends or the hesitant flights of novice pilots. It is still necessary to solidify the LED bar (or even remove it) and the video antenna. The possibility of transmitting in 100 and 200 mW is another advantage. Will the Trashcan benefit from the many mods as the Beta75X? The future will tell. In the meantime, as it stands, it’s a fun, nervous and resourceful device.

The Price and Availability

Right now Trashcan is available only on Banggood for around $100. I believe it will be available on Amazon also in the near future.

What’s In The B

For a cheap micro quadcopter, it comes with a remarkably well thought out and generous set of parts including:

Hope you enjoyed my Eachine Trashcan Review and if you got any questions or feedback, feel free to use the comments section down below.

What Is Drone Light Show And How It Works 2022?

How To Fix Drone Propellers That Are Not Working 2022?

What Is Drone Light Show And How It Works 2022?