So what are the pros and cons of drones in agriculture? Hang on, I will get to this question in a moment.
Drones and smartphones have both become common agricultural tools for farmers. Technologically-minded farmers can use the specialized drones for everything from pest control to plant health surveillance nowadays. The rapid development of software makes the drones cheaper and more autonomous, also reducing the need for specialized drone pilots.

Agricultural drones have been in use for about 20 years, but their use has been very low. For example, so far only about 2% of Chinese farmers have used drones. The main obstacle to the introduction of technology has been the complexity and cost of using the equipment.

Just now, in the era of smartphones, drones in agriculture are gathering popularity.  The current applications of smartphones make the drones almost semi-autonomous, thus significantly simplifying the use of equipment. The farmer must only mark the area of land occupied on his telephone, and the rest can be done by drone itself.
Here is quick overview what the pros and cons of drones in agriculture are:

Pros of Drones in Agriculture

Easy to use
Drones are simple to operate in farming. Deploying Drones takes less time to launch over an Earth’s surface. The buttons or icons from the mobile phone easily control the Drones movements. There is a manual that assists maqui berry farmers to work with Drones properly. An example is to execute the Drones to travel after pressing the release icon.
Reducing Farm’s Operational Costs
Labor costs are reduced by regular use of Drones in agriculture. Drones enhance the quality of the crops before they are distributed to the target markets. The device presents any infestation to the crops regularly. The UAV acts as alternative manpower to the farmlands. They assist in visually monitoring the farmlands. Drones reduce costs by being alternative quality detectors. This is to prevent rejected crops reaching target markets. This can on day offset the expense of purchasing the Drones. Farmers may even have the ability to avoid loss incurred due to infestations or diseases on the plants.
Spraying Fertilizers and Insecticides
Drone spray fertilizer chemicals on vegetation. Fertilizer bringing out happens right after planting the seeds. Insecticides prevent animal or insect invasion to the farmlands. Humans are at risk for growing diseases when exposed to insecticides. They are machines that are immune to pesticide’s chemical complications.

Mapping
Farming is a labor-intensive industry. Drones are required to replace maqui berry farmers that are exposed to a harsh weather. Farmers easily experience exhaustion while mapping their farmlands. Drones make it easier for farmers to survey the land and measure the land area. Drones can improve mapping in farmlands. The device provides a high-quality image that monitors the present farm condition. Good examples are topography changes, an existence of a new structure, and weather disturbance. When the Drones are optimized, they can fly over the whole farm capturing images or spraying fertilizers. These Drones can revolutionize agriculture, making the whole farming mapping process as a simple process.
Moisture Monitoring
Farmlands are usually exposed to either extremely dry or wet natural phenomenon. Several farms are either more dry or wetter than the rest farmlands. Drone detects farm areas that are experiencing either dry out or wet natural circumstances. Drones allow farmers to save lots of their crops. The device roams across the fertile land to monitor any danger signs to the crop. Drones closely keep an eye on of influenced areas transmission farmers for this.

Prevents Invasion
Drones fly around the fields to place an infestation. These are devices launched into the sky to monitor the farm round-the-clock. Any pests sign prompts farmer that there is either an animal or insect infestation. Infestation damages any plants. Animals or insects use crops for only a few days. Farmers suffer from source scarcity whenever there are insect or animal contamination. The Drone’s existence intimidates animals in the farmlands. The device uses ultrasonic waves that irritate small animals and drives them away from the plantation. Ultrasonic waves prevent any insect returning back to the farm.
Assesses Crop Quality
It is really important to improving crop’s quality to satisfy buyers. Drones assist farmers to enhance the crop quality in their farmlands. Drones are equipped with light processing devices to visualize the crops. The device provides farmers an idea about the crop’s health. The product detects unhealthy seeds to prevent shipping substandard products. The device analyzes the harvest quality after sprayed with insecticides or medicines. This is to monitor the effect of the substance on the crops. Farmers discard crops damaged by insecticides.

Cons of Drones in Agriculture

Legal Restriction
National Aviation Administration (FAA) dictates any Drones utilization in both commercial and in private areas. All Drones between 0,25 kg and 55 kg must be authorized to the FAA. The regulating companies provide higher limitations to Drones over 55 kg in weight. Drone users are not permitted to use these devices out of the line of vision or under a covered structure. Users should not soar the Drones over people who are not a part of their operation. Drones should travel at an elevation significantly less than 120 meters and less than 160 km/h in speed. Every state or region impose their own laws and regulations. Differences impact the culture and customs of the region that makes it unique from other claims. A farmer must have a complete understanding of the Drones’ rules and regulations. Agriculture industries must follow the laws with all the Drones. Any violations can apprehend the farmers such as imprisonment or financial fines.

Flight Route Limitations
Drones have a limited airspace to soar around. The restriction helps prevent Drones from showing the same trip path to another flying device. Airspace interference with other Drones can associated risk accidents. Airport terminals prohibit Drones use. Drones can destroy the propeller engine of a manned vehicle that may damage other aircraft. Should this happen, it can result in a catastrophic event to the aircraft.
Knowledge limitations on How Drones Operate
Farmers aren’t technically skilled. They don’t learn how to operate Drones because their schedule is mostly in farming. Farmers cannot use the Drones if they do not know how to operate these devices. There can be an instructional manual fastened which requires farmers to review its feature and function. Understanding how to use the Drones takes time until users begin to appreciate the Drones function. Understanding the Drones’ functions and features take time. New Drones users will need to have to allocate their time seeking to understand the function of each device.
Personal privacy Encroachment Fears
Farmers fear that their personal privacy is jeopardized when they start using Drones. They believe Drones expose their lands to the general public space. The primary reason is the Drones’ link to the internet. When people see Drones above the bottom, they presume they are watched. Other individuals document issues when they see Drones because they feel threatened. Even if the FAA mandates guidelines to modify every resident’s privacy, there are still violators that continue to invade other’s personal space. Anybody feels uncomfortable every time they see Drones traveling above their property.
Requires a License
Farmers have to go through Drones exam to get a license. They are able to operate Drones after they pass the exams. Once an applicant passes the commercial Drones exam, they are allowed to operate their Drones to the farmlands. A spotter is necessary by the FAA to ensure that the Drones are obvious in sight. Farmers are only allowed to operate Drones that are noticeable to the nude eye. After the Drones disappears from the sight, it violates the FAA’s conditions and conditions.
Expensive
A drone can be an expensive tool for farmers to assist in crop creation. The standard Drones price is averaging between $10,000 and $20,000. This amount is expensive for a farmer to pay. There’s a motto that says “the bigger quality, the more costly it is”. Drones with good quality features are more costly than other devices with fewer features. Illustrations are Drones which have brand are more expensive than an ordinary device. Farmers must buy Drone’s accessories. These are controllers, closed-circuit tv camera, internet connection, and mobile electronic parts. All accessories are sometimes more expensive than the Drones.

Improved Drones That Confuse Farmers
Farmers are not aware that Drones need regular revisions. Other Drones become outdated because newly upgraded versions that are definitely more useful in farming. It could quickly become outdated in only one year. The use of new technology confuses farmers. They are not prepared that Drones should be upgraded to the new variations. Farmers get annoyed when they are required to upgrade the Drones. Most farmers immediately think of the cost that cuts their farm’s revenues. Agricultural companies reject the thought of replacing their old Drones. They prefer preserving the device for so long as it is still functional. Regardless of whether there are newer variants, farmers still use their Drones to save lots of farming cost.
Safety Concerns
Safety is a problem when working with Drones in farming. Drones can end up creating safety dangers if not flown properly. An example is when these devices is flown too low can strike people or vehicles. This is one of why the FAA declared stricter rules and says have guaranteed further rules protect the safe practices of folks around Drones.
Severe Weather Trend
Weather is constantly changing and drones are really vulnerable to these conditions. Severe weather interrupts all flying objects including Drones. The breeze velocity associated with heavy rains intercepts Drones’ radio signals. Instances are tornado, hurricane, sandstorm, and thunderstorm.

Conclusion of Pros and Cons of Drones in Agriculture

Drones in agriculture make important essentials for the farmers. These devices help farmers to visualize their vegetation across their farmlands. The technology stops any risk of getting rid of crop’s efficiency. Farmers usually watch an increase in investment results after they begin using Drones. The idea of having eyes in the sky gratifies agricultural creation for farmers. Drones offer an alternative attention above the ground towards the crops. Without Drones, farmers conclude working all day every day. Farmers must watch over their fields without needing Drones. Drones make it easier for farmers to identify farm problems. These devices help saves time to save the vegetation. Farmers are thankful for using Drones. This is to avoid losses from infestation or severe weather incidents. Farmers know that we now have downsides considered when committing over a Drone. Technology observers are aware that we now have problems associating Drones use. Technology experts carry out Drones research to ensure that future problems won’t happen again.

DJI Mavic Air Review – Reasons Why We Love It So Much
10 MOST COMMON QUESTIONS ABOUT AGRICULTURAL DRONES EXPLAINED
Can You Fly Drones At Night? – Must Read Before Doing It 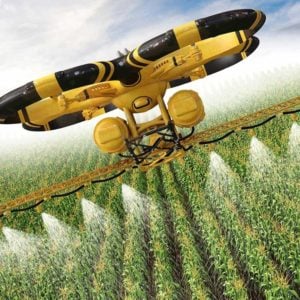 How To Fly Your Drone In The Wind?

Flying A Drone Over Private Property – Rules And Regulations