Here’s a guide on how fast and high can drones fly. Check it out!

The two limits set by the FAA (Federal Aviation Administration) for how high you can fly in the United States is set at 400 feet and how fast you can fly is set at 100 mph. In Europe you can fly up to 500 feet high and up to 100mph.

These limits are generous, as not many drones can fly as high or as fast as the limits are set.

Most drones are locked via software for their max height to not go above 1500 feet, however, one man was able to take his drone 11,000 feet by adjusting his drones software. Below you can see a picture he took with his drone.

Height is limited on drones by internal software. But speed depends on the individual and isn’t usually hard capped by software. Of course you don’t want to go too fast or you’ll be breaking the law.

The fastest commercial drone ever released is the Yuneec Typhoon H Pro. It has a top speed of 70 mph.

How to fly your drone fast and at max speed

First of all, let me get this straight it is almost impossible for you to break the law, most drones only go up 50 mph and even with the tips I give you, you aren’t going over the 100mph limit set by the law.

First things first: you need to lighten up your drone. Remove all unnecessary parts including the camera and landing pads if possible.

Your stuck with the basic shape of your drone, but there will be a part of the drone which is pointier or shaped in a way that lets air slide over it more easily. That’s the point to accelerate through the air.

This will make sure that the air gets pierced through easily, just like when a diver dives into a pool and the water gets displaced easier.

Lastly, go full throttle and see what your drone can do. Just make sure to do this in an open field and not in the middle of your home. Even if it’s a nano drone.

What is a Drone?

A drone usually refers to an unmanned and remote-controlled aircraft. Drones are used by militaries for recon operations and remote drone attacks. There are places so dangerous that you wouldn’t want to send a person in there. A drone will do just fine, as its job is to go places where it’s dangerous to send men.

There are different kinds of drones, from quadcopters to fixed wing drones.

What is a Quadcopter?

A quadcopter is a kind of drone, that refers to the drone which has 4 wings on it hence the name quad, quadcopters come in all shapes and sizes just like drones.

A drone refers to a flying device which is unmanned and controlled via remote control.

Quadcopters are drones with 4 wings.

Fixed wings may or may not have propellers inside the wings for stationary take off.

The propellers help the drone get altitude while the wings help it glide around seamlessly.

Quadcopter on the other hand have 4 propellers and the wings are used to lift the drone up and off the ground.

Once flying, the speed of 2 propellers is increased or decreased in order to make it pitch towards a particular direction resulting in it moving in the direction. 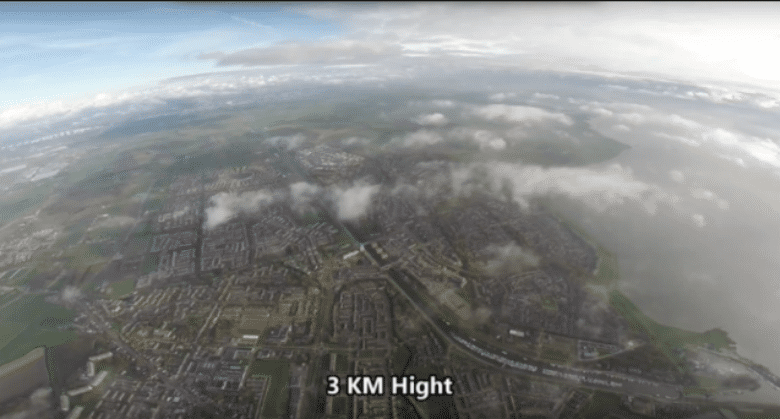 Article Name
How Fast and High can Drones Fly?
Description
The two limits set by the FAA (Federal Aviation Administration) for high you can fly is 400 feet and how fast you can fly is 100 mph while, in Europe you can fly up to 500 feet high.
Author
Andrew Mcdonald
Publisher Name
Drones-Pro
Publisher Logo