Drones have always been something of a futuristic prospect for the longest time in people’s lives. Some look upon drones as little more than hi-tech toys, but a growing percentage of the population has discovered the utility of drones in filming.

Remember the swathing panoramic shots in documentaries and stable coverage of your favourite formula one races? All that has been possible thanks to an unbridled evolution and improvement among the various types of drones.

However, there is a minor caveat. Drones with a weak frame are generally found to be not as sturdy or resilient against damage. This drawback of a drone can easily be negated if an optimal frame is chosen.

Among them, probably the most durable and non-intrusive design of drone frames is the dead cat drone frame.

Read on to know all there is about the perfect dead cat drone frame for you, as well as why and where you can buy it.

Where to Buy the Best Dead Cat Drone Frames?

I found that Amazon.com is the best place to buy dead cat drone frames. You can check the reviews and ratings posted by the customers. A lot of the reviewers also put up images and also give their honest opinion about the quality, shape, usability and more.

Here I’m listing the best dead cat drone frames I found on Amazon. Check it out!

This is by far one of the most popular and best selling products modelled in the dead cat fashion. Made with a  3k carbon-fiber airframe featuring removable 4.5mm arms and a 5″, 6″ and 7″ version, lumenier is a technological marvel from all aspects.

Made with 360° operability in mind, the red in black combo further adds to the overall allure of the frame. It also boasts a perfect compatibility with a DJI Air Unit.

Made for those who settle for nothing less than top of the line, this enormous 10 inch model makes for a stable and hardy adversary to rogue winds or sudden falls. There is also ample space for the camera mounts as well as 360° TPU protection and antenna mounts.

One of the most technologically advanced, durable options, the Avenger 225, although looking similar in design to the lumenier qav r2, it is a huge jump in usefulness and technological support on the whole. Stay tuned for a greater in-depth exploration later on.

What is a dead cat drone frame?

A dead cat drone frame essentially means a type of an fpv or first person view drone frame which allows the user to accomplish two goals in one shot. It forms the backbone of their drones which are protected from external damage and they have the option to experience a first-person perspective view of the footage captured via their drones.

Shaped like an asymmetric ‘X’, the dead cat drone frame is the best bet for those looking for an unrivalled immersive experience, as it ensures that nothing interrupts or obstructs your view.

Even among dead-cat drones, there are various styles, sizes and companies to choose from, each offering unique specialisations according to your needs. Some of the prominent ones are :

There are a number of reasons why the unconventional asymmetrical ‘X’ of the dead cat drone frames caught on. Some of these features are :

The squashed style enables the propeller to operate freely from the camera or dji unit. With an increased distance from the propellers, the camera can capture uninterrupted and unobstructed footage.

Being slightly asymmetrical, the dead cat frames require a hardy build to stabilise itself in the air. Models such as the lumenier qav r2 and avenger 225 HD really push the limits of hardware and resilience with the 3k carbon-fibre and 4.5mm+ thick bottom and top sheets as well as detachable arms with 3mm+ thickness.

As has been established already, the asymmetry of the design allows for an unconventional design. With two arms perpendicular to each other, there is an enhanced sense of aerodynamic potential which would be beneficial in races or stunts. There is also a scope of accommodating uniquely shaped centre carriages and heftier camera or fpv equipment without much hassle.

A pod is a canopy that is attached to a frame as a means of protecting the sensitive internal electronics from damage. FPV Drone Frame pods are typically 3D printed in TPU (a flexible polymer) or sometimes even manufactured by moulding carbon fiber or polycarbonate.

These pods are usually mounted atop the back of the frame. To accommodate pods, the back of a dead cat fpv frame is usually made sturdier and wider, equipped with mounting holes. The typical dimensions of an FC Mounting hole in a standard dead cat frame are : M3*30.5*30.5 & 20*20 mm.

How to choose a dead cat drone frame?

Now that you know all that is to know of a dead cat frame, the question arises : which frame to choose ? While choosing a dead cat frame, one must remember to prioritise technological convenience and build quality. Considering all prospects, I personally am a huge fan of the TCMMRC Avenger 225 HD blue model.

The blue model has a slight edge over the original version as it has 2 extra 20*20 mm mounting holes providing extra stability and connectivity options. Here’s an in-depth look at all the features of the same:

Being a beginner in drone racing and assembly, I was very intimidated by the hours of work cut out in front of me. There was a constant feeling of helplessness while gazing at the parts of a drone frame strewn in front of me. However, all that went away when I opted for the TCMMRC Avenger 225 HD blue variant.

The rack was very easy to assemble and the drone itself was very easy to operate because it had a low centre of gravity. Some of the kids in my home also enjoyed assembling the drone as all the parts are safe to be kept around children of 9+ years of age.

Being a connoisseur of high-quality footage, I always had felt that drone footage always felt short vis-a-vis handheld footage. I was, however, proven wrong as I mounted a DJI High definition camera onto my Avenger 225 HD frame unit. The footage was crystal clear and in no way inferior to the best handheld cameras available. It also supports the fixing of 915 antennas and 2.4G receiving antennas.

The double tower structure design of the 5 inches and the 5.1-inch variant ensured a larger internal space and stable flight pattern. With a wheelbase of 225mm, it has a quick response speed. And it is easier to change attitude during flight. I faced no difficulties in the department of speed or accuracy while I used it recreationally or even for VR fpv sports.

Often the most important aspect to buyers, including me, becomes the build quality and durability. The Avenger 225HD satisfied me in every aspect as it comes with a 3k reinforced carbon fiber body in a matte black finish. Supported by rubber ends and non-sharp edges, the vibration damping effect achieved makes the flight path stable.

The carbon fiber also slightly increases the battery life of the device. There are also 2x TCMMRC Battery straps, each of dimensions 200*20 mm, provided for an extended flight life.

How is the dead cat style different from the X or true X style ?

Although virtually similar, there is a slight difference between the two. The two ends of a true X drone are perfectly symmetrical, but the same cannot be said of the dead cat style. This asymmetry is probably to accommodate varied mounting options, and avoid propellers in the camera’s line of sight.

Do we get spare arms when we buy a dead cat drone frame ?

Yes, you would generally get two extra arms with your drone frames.

What is the average battery life of a dead cat drone frame ?

While the battery life of a drone is said to not be the greatest, it does perform splendidly for at least 15-20 minutes. The two extra battery straps given with some models greatly extend the battery life to 30-35 minutes depending on usage.

When it comes to personal dead cat frames, selecting the perfect frame for you is ultimately a decision entirely up to you. Even if the aesthetics seem tempting, it is important to build or buy a stable and hardy unit to avoid future inconveniences.

As long as you don’t practise taxidermy on your dead cat (which the founder of dead cat style, Bart Jensen interestingly did to create an organic drone), you are good to go. 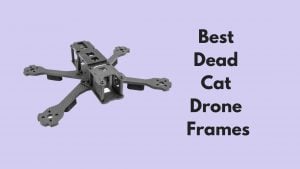 What Are Military Drones Used For?