We curated a list of the Best Star Wars Drones. Check it out!

Your collection of Star Wars merchandise is not complete without the marvelous and fully functioning Star Wars drones. Read this article to know the top 7 Star Wars drones and more insights on this.

The Star Wars movie franchise has a tremendous global fan base, and even after 30 years of its debut, it has etched a lasting impression with its star spaceships and attractive weapons.

This iconic movie franchise changed the world of cinema and the toy factories to attract kids and adults alike. According to Statista, most Star Wars movies have minted close to USD one billion across the global market.

There are various Star Wars merchandise in the market, starting from T-shirts, hoodies, action figures, to name a few. But none can match the real-like Star Wars-themed drones. They have become popular among teenagers with remote controllers and Star Wars-themed battling drones.

If you are a Star Wars die-hard fan, this article will take you through the best 7 Star Wars drones and why they can be a precious collection in your movie collection chest.

Although there are limited Star Wars Drones available in the market, some manufacturers have committed to building out-of-the-world drones to offer the immersive experience of the movie. Given below is the detailed list of the top 7 Star Wars drones.

The U.S.-based company Propel is the best manufacturer of Star Wars drones. A winner on this list is the Propel Tie fighter drone. It is known for its unparalleled light-up feature and the music from the original Star Wars film.

Propel has again won a million hearts with Star Wars Speeder bikes and presents a new aspect to the future of interactive collectibles. This quadcopter is well-known for its agility and maneuverability.

The Millennium Falcon is an underdog in Star Wars and the dream of every fan who wishes to overcome adversities like the next Han Solo! This hunk junk has taken a rightful place in the Air Hogs Millennium Falcon XL. This drone has a ship-like skeleton and has garnered many positive reviews for its speed and size.

The X Wing drones are modeled on the fighters used by the resistance against the dark side of the force and command a massive fan base. This high-performance drone is hand-painted that fits the size of your palm. The replaceable four propellers and the battery backup are some of the key points about this drone.

If you want to try some cool mid-air tricks and stunts, then this drone is your first choice. This fighter drone can fly up to 100 meters from the controller system with a user-friendly controller.

This particular drone is modeled on the iconic and versatile Rebel Alliance Starfighter loaded with firepower in the form of laser cannons and torpedo launchers! It is mainly a choice of the young as it comes with a light engine and offers the utmost ease of flying.

Star Wars is incomplete without the two indomitable fighters- W-wing and T.I.E. fighters. To pay tribute to their legacy Air Hogs introduced this drone, and soon it swarmed into the market.

The market for Star Wars collectibles is always high on demand, and hence a double check on the product and its manufacturer goes a long way. Here are a few tips that come in handy while picking your favorite Star Wars drones to fly in the backyard.

To capitalize on the massive Star Wars market, many brands recreate the drones with a compromise of quality. Hence, choose the drone that gives you an aura of Star Wars and with a near-to-original chassis.

Since Star Wars drones are typical fighter drones to revive the movie scenes into real-time things, controllers play a pivotal role. Many Star Wars drones are designed to take part in multiplayer battles, and hence you cannot take chances with the weak controller that ends up crashing and losing control. Therefore, choose a drone with an easy control and handle system.

Like any other toy, Star Wars drones also have various replicas. They can be of short span and break easily. Hence, make a complete inquiry on the durability of the drone.

The average cost of a Star Wars drone

You cannot settle for less when it comes to your favorite movie. Since Star Wars drones are a one-time investment to gift your loved ones or yourself, opt for a drone that comes with all the features.

The cost of these drones ranges between USD 50 to USD 300 with the standard features. You can heap on the best offers during Star Wars Day as some companies offer a discount price.

Apart from making aesthetically pleasing and appealing collectibles, Star Wars drones have the following benefits for a drone enthusiast-

Star Wars drones can fly at a decent speed of 35 mph to give you quick thrills and excitement with your team players.

Star Wars drones are designed to perform 360° flips and various stunts to make the battleground more interesting to recreate the famous battles of the Star Wars franchise.

These drones are controlled with a remote controller. The significant upside of using these drones is the feature of auto takeoff and landing.

Most Star Wars drones are best known for their beginner’s training guide. It is fundamental to train novice pilots to perform thrilling maneuvers and fly without crashing or colliding with one another.

Do Star Wars drones have cameras?

No, Star Wars drones do not have an in-built camera feature.

No, Star Wars drones are not as fast as normal drones. These drones fly at a maximum speed of 35 mph.

What is the average flight time in Star Wars drones?

The flight time is less in Star Wars drones. It is anywhere between 7 – 10 minutes.

What are Star Wars drones?

The Star Wars drones are designed to pay homage to the famous Star Wars franchise and the series of movies since 1977. They come as cute miniature drones or functional ones to fly around the house.
There are primarily two classes of Star Wars drones. One is fully functional with all components recreated inspired by the starships. The second is the Star Wars battle drone sets which contain drone vehicles used to recreate some of the iconic battle scenes of Star Wars. The main attraction of these Star Wars drones is their appearance. It is available as Tie Fighter, X-Wing, Millennium Falcon, among others, at a very affordable price.
Star Wars drones are generally quadcopters that look familiar to the two famous droids in the movie – R2-D2 and BB8.

Star Wars is a famous Marvel movie having a loyal fan base worldwide. In memory of this great movie, several merchandising and tech companies have joined hands to create a lifetime experience for the fans.

A joyful addition to this is the drones. The Star Wars drone has a top speed, reverse propulsion system, attractive lighting, and music that sync with the Star Wars theme.

These drones come at a very affordable price. But many replicas have encroached on the market, and hence make a wise choice before landing on your dream Star Wars drones as a perfect gift for the holiday season. 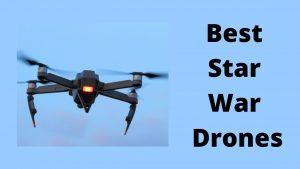 We curated a list of the Best Stars Wars Drones. Check it out!

How To Connect Holy Stone Drone To Phone?